Chilean Dishes – You Have to Eat when traveling to Chile From hearty meat dishes to bright, tangy ceviche, this list of traditional Chilean Dishes is a tour guide for your taste buds. Wash down these distinctive dishes – many originating in the heart of Chile’s countryside – with a glass of local wine or a pisco sour.

Chilean Dishes – You Have to Eat when traveling to Chile Bread is an integral part of Chile’s culinary identity and overall society: here, it is common to visit a panaderia almost every day to buy fresh bread for once (Chilean tea time) and other meals. There are many different varieties of bread (all baked fresh and daily) to try but arguably the most popular is the marraqueta.

The marraqueta (also known as pan batido or pan frances, depending on which part of the country you’re in) is said to have been invented in the port city of Valparaiso in the late 19th century by a pair of French baker brothers. It’s known for its iconic se-tenant shape: a singular roll of white bread that’s been divided into four smaller but still attached rolls. Great for sharing, the marraqueta rolls are used for toast with egg or avocado, as sandwich bread, and also as the bun for chorizo in choripan. With its warmth, easy recipe, and ubiquity, cazuela is the Chilean equivalent of chicken noodle soup. It’s also one of the best examples of the blending of indigenous and Hispanic cuisines, as the soup is similar to both the Spanish stew olla podrida and a soup from the Mapuche tribe.

The typical recipe consists of a meat or veggie broth, in which chunks of meat like chicken or beef and vegetables like corn on the cob, potatoes, carrots, celery, and the butternut squash-esque Andean squash abound. Rice is sometimes also cooked along with the broth. The meat and vegetables are served in a bowl filled with the broth, and most Chileans drink the broth first before eating the main ingredients. 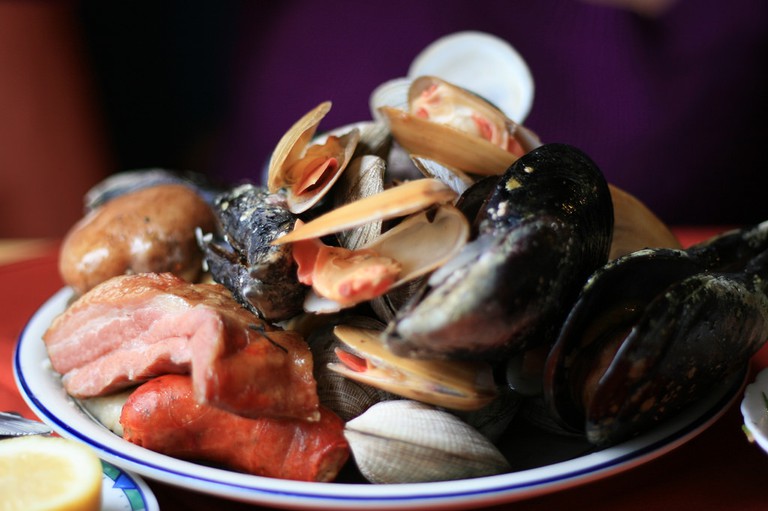 A traditional food of Chiloé Island in southern Chile, curanto is cooked with meat, potatoes, shellfish, a potato bread called milcao, vegetables and dumplings. What’s unique about curanto is that it is prepared using hot stones in a deep hole in the ground. The tradition of preparing curanto began with the indigenous Chono nomads that lived on the Chiloé Island – a tribe that is now extinct. 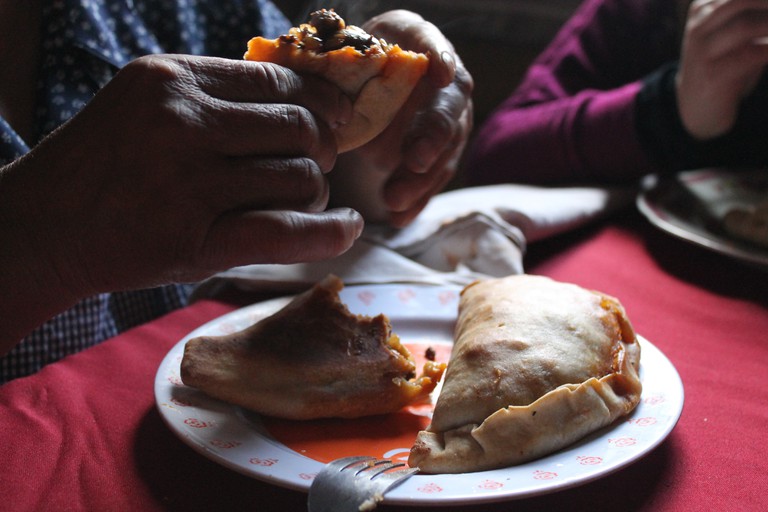 These fried or baked dough pastries are usually filled with either cheese, seafood or a mixture called pino that consists of ground beef, olive, egg and onion. While Chileans enjoy empanadas year-round, homemade empanadas de pino are one of the key traditional foods served during Chile’s Fiestas Patrias – national holiday celebrations that take place in September. During the festivities, terremoto, a type of sugary drink, is also quite popular. The beverage includes sweet fermented wine with pineapple ice cream and your choice of bitter fernet or grenadine. An Anthony Bourdain favorite from Chile, arrollado de huaso is pork roll that’s been chopped up, mixed with bacon slices, chilis and spices, rolled in pork skin and then boiled. Served with an avocado salsa and other veggies, it’s a southern Chilean dish.

Since this is a coastal country, seafood plays as large a role in the Chilean diet as meat. Razor clams covered with parmesan and crab pies to lobster and squid plates, there’s seafood dishes aplenty that are beloved by Chileans.

Pablo Neruda even wrote an ode to conger eel soup. Seafood is so diverse it’s no surprise that a Chilean favorite for centuries includes the sea urchin. Loaded with a lot of idoine and slimy, if you haven’t had it before it tastes like tongue and has a fresh-from-the-sea flavor. It can be found raw and served clean from the shell in restaurants and fish markets.

Machas are clams, so machas a la parmesana is a Chilean clam dish topped with cheese.

It includes parmesan and gouda cheese, as well as white wine, cream, and butter. If you’re lactose intolerant, this is not the meal for you!

This Chilean dish was introduced in the 1950s by Italian immigrants. It’s very popular along the coast, where large machas (saltwater clams) are easy to catch. Machas a la parmesana is a delicious meal that seafood and cheese lovers across Chile enjoy. My maternal grandparents are from Guadalajara, Mexico, so growing up, there wasn’t a dish in …